This blog was first posted at EasingAwake.org .

When we sit down to meditate we may be greeted by a plethora of phenomena: thoughts, feelings, sensations, fears, yearnings, flickering images, clips of memory, fragments of melodies, and more. To help navigate this inner landscape, the Buddha drew many maps: the map of jhanas, the map of dependent origination, the maps of hindrances, awakening factors, ennobling truths, and more. 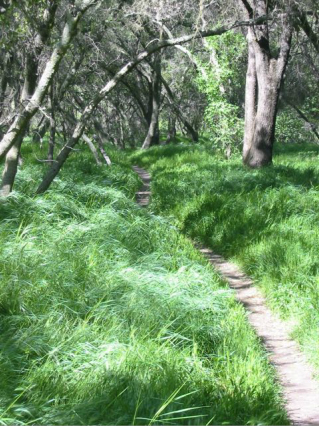 Before looking at the distinction, it helps to remember the adage that maps are not the territory. Like all maps, the Buddha’s are quick sketches on scraps of parchment: highly codified abstractions leaving out most of the vitality of the landscape.

A road map, for example, is just a set of lines on paper or a computer screen. It leaves out trees, potholes, guardrails, embankments, buildings, and thousands of other details. Some computer maps use photographs to fill in details. But even those pictures are frozen in time and leave out the effects of time of day, weather, the flow of people and cars, change in seasons, and almost everything else that makes the terrain a shimmering reality.

If we fixate on the maps, we are stuck on second-hand drawings rather than first-hand experience. The Burmese monk Sayadaw U Tejaniya calls this “second-hand wisdom.”

Many meditators understand this trap and try to avoid it by not learning about the jhanas. They'd rather discover the territory themselves in their own meditation. While the intentions are laudable, the results can be discouraging. My own practice wandered in circles on a plateau for several decades for lack of understanding about how the mind-heart unfolds naturally – which is what the jhanas map out. As I began to understood the map, I still had to explore and learn directly for myself. But I knew better about which direction to head and where to look.

For example, restlessness arises from too much energy in the mind-heart. If we try to force the mind to be still, we put more effort and energy into it – the conditions that give rise to more restlessness. Trying hard to be peaceful leads away from peace. If we understand the causal relationship, then we relax and the restlessness gradually fades on its own.

If we look at the Buddha’s maps through the lens of desire and aversion, we are like the child in the back of the car asking, “Daddy, are we there yet? How come we can't be there now? I don't like it here.”

If we look at those maps through the lens of wisdom, we may see objectively that we might be happier if we were someplace else. But rather than grasping for the destination or comparing our progress to someone else’s, we are more interested in the process. What are the causes and conditions that give rise to where I am? What are the causes and conditions that might give rise to more contentment? We experiment by creating more beneficial conditions. We use the jhanas or dependent origination or other maps to explore and see what happens.

The art of it is becoming more interested in seeing the causal relationships than in getting any specific place. If this results in more peace, that's lovely. If it results in more distress, that's lovely too because we've learned something about how the territory actually works. Like good scientists, we're not grasping for a result, just learning how natural laws work.

The maps of the jhanas, etc. suggest experiments we can try. This changes second-hand knowledge into first-hand insight and wisdom.

I’m a slow learner. I push and pull more than I'd like to admit. But it’s become clear that reality doesn't care what I want or don't want. Reality follows its own nature rather than my preference. Grasping and aversion just add more pain.

Ironically, the more we try to get someplace, the slower our progress. The more we’re content with what is and seeing how it works, the faster we change.

Becoming more interested in the process than the product emerges as the only sensible path. The Buddha's maps suggest various experiments we can try. Taking his word for it is second-hand wisdom. Discovering through our own experiences gradually replaces the sketchy maps with a rich, first-hand wisdom about the flux and flow of being alive.

Does this path have a heart? If it does, the path is good; if it doesn't it is of no use. Both paths lead nowhere; but one has a heart, the other doesn't. One makes for a joyful journey; as long as you follow it, you are one with it. The other will make you curse your life. One makes you strong; the other weakens you. (Carlos Castaneda, The Teachings of Don Juan)