At 4:00 in the morning Lila padded into the bedroom talking to me with each step: “meow, meow, meow.” I was meditating. She hopped onto my lap, put her front paws on my chest, vigorously rubbed the top of her head and chin on my chin, and licked my nose. If I had just started to meditate, I would have stroked her for a few minutes. But I’d been sitting for an hour and was pretty cooled out. I just smiled without moving. 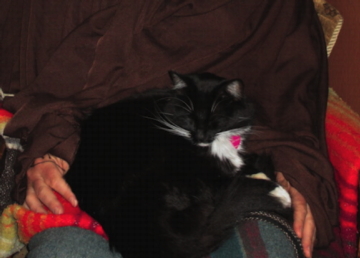 After a few minutes she curled into a ball on my lap, sat up, curled again … the third time she got it right. She nipped my hand gently with her teeth, licked the same spot, and then purred herself into light rapture. After several minutes she rested her head on my hand and dropped into contented sleep.

I found her presence soothing too. She’s a meditation buddy.

When we relax our human-centric focus, we live in a vast web of many kinds of creatures including pets, squirrels that eye us from the lawn, birds that watch us from the branches. We aren’t alone. And when we have kind relationships with the creatures around us, life feels kinder. Saint Francis was not an oddball for his rapport with other beings. Those who thought him odd were oddballs.

At least that’s what I’ve learned from my cats.

Still, I wonder what Lila actually experiences. She doesn’t speak English. Interspecies communication can be strong, but it’s more intuitive than articulate. I don’t think she meditates in the sense that I do. But I know there’s more going on than a dumb nap. It leaves me wondering what actually flows through the minds of the creatures around us.